There are some folks that look forward to football season, (or the sport season of their choice).  Some wait for an upcoming video game, movie (I’m guilty of this one), book (also guilty), and other things.  I personally look forward to several events during the year and the Yemaya Festival in Rockaway Beach New York is one of them.  It is a time that folks in the African Traditions that follow the Orishas (Deities from West Africa) meet and commune to celebrate the Orisha Yemaya, the Goddess of the Sea, the Eternal Mother.

This year’s event was held this past Sunday, September 7th in Beach 30 at Rockaway Beach.  The day usually starts with the Yemaya Egbe (House of Yemaya) setting up at the beach early.  They set up a tent where the throne will be, and finish their logistics (where will we put this, when are we going to start, and all of those details that make any event sparkle.)  The event was held at a great location, there were bathrooms close by and there was a playground for the children at a very short walking distance.  (As a mom, this is great – just in case that sand cannot keep my children busy enough.) 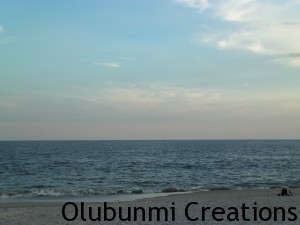 The members of the Egbe always begin with a procession, in which the attendees line up into two rows that is the length between the shrine and the ocean shore; allowing a big space in between the rows so that the Egbe members and the drummers begin the procession from the shrine to the water.  The drummers, play, the lead singer sings and we respond with song.  This is one of my favorite parts of the Festival.  It is as though I’m transported to the middle of Africa for just a little bit.  I find this very special and spiritual which is why I did not take any pictures of this. 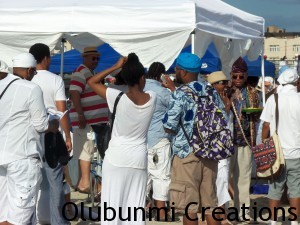 One of my take-aways from an event like this, are the people + nature.  Both working cohesively is an amazing thing.  There were people in this event from all walks of life, colors, sizes, and they looked beautiful wearing their whites, blues, greens, and different colors (although mostly white).

The weather absolutely cooperated.  It was so hot when we got there, and then the breeze from the seas started to come in, and the sun was still shining, but the waves were coming in and out.  Depending on where you were – you could hear the drumming, singing as well as the waves.  People were dancing around the shrine area where the drummers and singers were.  On the outside of this area, the children were running, playing with sand, and just being kids (mine had a great time yesterday.  Families were together, and folks were connecting with one another. 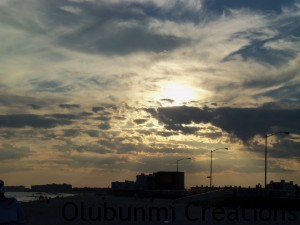 A really big perk of this event is the connection with others.  I get to see brothers and sisters which I have not seen in a long time.  I also get to meet new people which normally I would not cross paths with.  I met a young woman who has traveled the world, and we were talking about fabrics, as I was wearing a fabric that is used in Yemaya’s worship.  I met another young lady who is an artist.  I met many mothers, grandmothers, and people who could relate to having young children and those who just love children (which was great as my little ones were quite busy during the event.)  I got to hear of upcoming events, and this is what networking really is about.

I keep seeing that networking is very important so that we can all share and grow as a community.  After speaking with some folks after the event, I was told that it was very impactful, meaningful and uplifting.  The weather, the people, the drums and the music were moving, and spiritually inspiring.  Leave me your thoughts below on your experiences.  Have any events that have inspired you spiritually? Creatively?  Has some place recharged your soul?  By sharing your thoughts, you are networking and helping our cultural community to grow.

7 Responses to "Yemaya Festival 2014 is About People"

This site uses Akismet to reduce spam. Learn how your comment data is processed.